The world of VR gaming is constantly evolving and successful innovation is what inevitably separates leaders from the rest of the pack. Blue Goji is currently developing technology that will shake the very foundations of contemporary gaming. Using our newly improved Infinity Treadmill system, we are creating a gameplay interface that will allow users to control every aspect of their movement within a game, with the real-world movement of their body. This new “Human Joystick” technology will be the first of its kind, expanding upon currently established VR gaming standards.

The current setup of the Infinity Treadmill allows users to move through a game via their forward motion on the machine. The newest improvements to this system will measure the pressure of a user’s footsteps along a horizontal axis as well as the pitch of their body, to control steering for both left and right directions in conjunction with relative speed.

This update represents the latest in active gaming technology, creating a game experience aimed at being so immersive that users will be unable to distinguish the real world from the interactive gamespace. Users will be required to master not only the strategic elements of the games they are playing but also maintain and control all aspects of their real-world movement, to succeed within the games. The new technology is currently being implemented for two of Blue Goji’s games designed specifically to be played on the Infinity Treadmills: one a bike racing game and the other a rail-shooter exploration game. Once the technology has been fully developed, it promises to be the cornerstone upon which future gaming technology is founded. It is the goal of Blue Goji to be a key influence in the realm of VR gaming and active eSports. 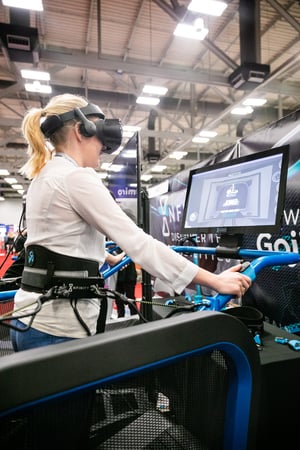 The defining quality of everything that Blue Goji produces is an emphasis on games and technology that promote and reward activity during the gaming experience. Our overall mission is to create games and platforms for gaming that break the traditional stigmas and stereotypes associated with gamers and video games. The world that Blue Goji is attempting to create is one where gamers can be as active and athletic as people who utilize traditional exercise methods.

The “Human Joystick” technology will also be implemented as an integral component of the upcoming Blue Goji EverCare program, which will focus on providing gaming and exercise opportunities for older populations. More on that soon.

To keep up with all of our endeavors, make sure you are subscribed to the blog. If you have any questions or comments about this new technology, please leave us a comment below.