Infinite Success at SXSW and IHRSA 2019

The air was electric surrounding the Blue Goji booth at both IHRSA and SXSW this year as the company showcased their improved Infinity Treadmill, featuring the Active eSports platform. The Infinity was well received by participants and onlookers alike, during both marquee festivals. These exhibitions represent the cutting edge of both gaming and fitness technology, highlighting innovative companies like Blue Goji. The future of Active Gaming is here with the arrival of the newly updated Infinity Treadmill. 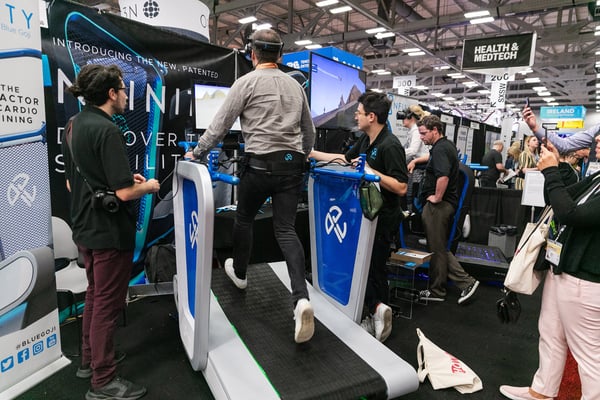 The week began on March 10th at the SXSW trade show, with the unveiling of the Infinity's new multiplayer function that allowed participants to race against each other in a completely immersive VR environment. Blue Goji’s game GoBikes is a VR racing game that enables players to compete within a unique game space that requires the added element of real motion on the Infinity Treadmill.

While some participants chose to walk through the track at a moderate pace, other competitors used the opportunity to get in some serious cardio exercise. Most racers found the experience to be so real in appearance and feel that their bodies actually experienced the sensations accompanied with zooming through a mountain race track.

The SXSW Trade show is one of the premier events for technological innovation across the globe. With hundreds of the world's leading tech companies participating in some form or another, Blue Goji stood out as a leading force in the realm of VR gaming development. 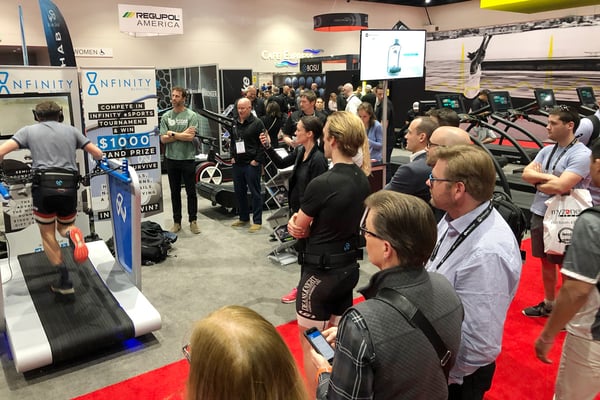 The success of the expo at SXSW led immediately to the intense competition that Blue Goji hosted at the IHRSA festival in San Diego, later the same week. The IHRSA festival is the most prestigious health and fitness convention in the country. With over 8,000 contributing member clubs across the globe, they seek to facilitate collaboration and growth for organizations with health and wellness as their driving motivations. Blue Goji carried a significant presence at this year's festivities by hosting a contest using the Infinity Treadmill.

A $1,000 grand prize and a $500 runner-up prize were offered for the best racing times on the GoBikes mountain course. The sheer volume and enthusiasm of willing participants was staggering. As part of Woodway's trade show space, Blue Goji set up four Infinity treadmills. Over the course of two days, Blue Goji's booth emerged as the epicenter of VR gaming at the festival. After several qualifiers and a semifinal round, the best racer was crowned champion after posting an unbelievable time of 1 minute, 23 seconds. Not only did the competitors appreciate the Infinity VR experience but the crowd of interested patrons was often 30 to 40 people deep as they enjoyed the broadcast view of each race.

There was never a dull moment throughout the competition and it seems that Infinity has catapulted itself onto the forefront of Active eSports gaming technology.

The Infinity is scheduled for release on the market later in 2019. If the receptions at IHRSA and SXSW are any indicators, it’s going to make quite a splash in the world of VR gaming and technology. Keep an eye out for future posts as Blue Goji prepares to shock the world with their mission to make VR gaming and exercise a truly singular experience. For more information regarding the Infinity Treadmill, sign up for updates on the Infinity's dedicated webpage.

Blue Goji has proven to be a leader in the innovative tech space. To keep up with all of our endeavors, please subscribe to the blog. Any questions or comments can be left below.